Roosevelt has found a new and happy life with FSL 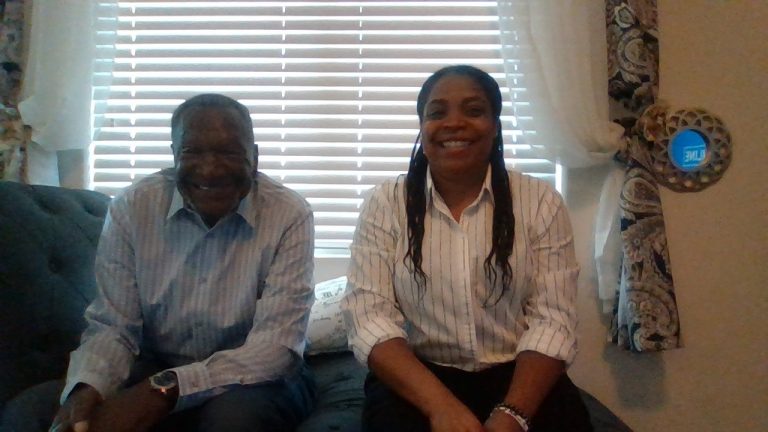 Everyone’s birthday is a special day. For 68-year-old Roosevelt, his birthday has an even more special meaning than most. That’s because on his birthday, July 27th, two years ago, he first arrived at the home of his new caregiver, Marie Saint- Juste.

When Marie first met Roosevelt, she knew he needed help and someone to step up and care for him. His hair was dirty and not groomed. His beard was overgrown and it was clear he hadn’t shaved in months. Marie was heartbroken when she saw Roosevelt’s physical condition.

“My heart was crying for him when I first met him, Marie recalls. “I can remember telling myself over and over again that this man needs help. He was in really rough shape when he arrived”

Roosevelt’s physical appearance may have been rough, but it didn’t come close to how rough his life had been over the last few years. Five years before meeting Marie, Roosevelt suffered a massive heart attack. He was rushed to the hospital where they performed bypass surgery on him, which left him having to use a pacemaker for the rest of his life. With no job and no family in the area, Roosevelt became homeless. But then FSL stepped in. Through FSL’s Adult Behavioral Health Therapeutic Home (ABHTH) program, Roosevelt found a new home with Marie in her “Just like Home” program.

“The first thing I did was get him on a healthy diet!” Marie said about her first few weeks with Roosevelt. “I also made sure he got the best primary care physician and a good heart doctor. This man had a pacemaker and had never been to a heart doctor! I believe that if you look good, you feel good so I made appointments for him to visit and barber and get a much-needed manicure.”

Marie is passionate about caregiving and takes her job very seriously. It’s the reason why she and her husband, Petrus, left their Ohio home to come to Arizona. They wanted to make a difference in people’s lives like Roosevelt. Marie was born in Haiti, where she endured physical and mental abuse from her mother. It was this abuse that inspired Marie to become a caregiver. She was determined to be the opposite of an abuser. She wanted to be a provider. Marie, 46, has been happily married for 30 years and has three children. Her oldest son has three children of his own. “I’m only 46 and I’m already a grandmother!” Marie says through her laughter. “Can you believe that?”

Marie’s family became one person bigger when Roosevelt came into their lives. He’s much more to Marie and Petrus than just an ABHTH patient; he’s family. They have dinner at home every night and occasionally go to the movies together. Whenever they take a road trip for the day up to the lake, Roosevelt hops in the car and joins them. On Friday and Monday nights you can find Roosevelt, an avid WWE fan, in the Saint-Juste’s living room watching and cheering on wrestling matches with Petrus. They also enjoy watching his favorite basketball team, the Phoenix Suns.

This environment is all a great benefit to Roosevelt’s well-being and likely an important factor in his remarkable turnaround over these last two years. Marie has given him everything a caregiver can provide. A good diet, the proper medical attention to his cardiovascular needs, and monthly visits to the barber and the salon. However, perhaps most importantly, Marie has given him something that Roosevelt maybe thought he’d never have again. A happy home and a family.

“From where he was, compared to today, he’s in great shape,” Marie says excitedly. “He goes to an adult day health service four times a week where he has many friends. It’s been wonderful to see him transform into the happy man he is today.” To see such a positive change in Roosevelt’s life is the ultimate reward to Marie. “My heart goes into everything I do at FSL.” Marie states. “I believe that if your heart isn’t into what you do then you shouldn’t be doing it. My heart remains 100% committed to caregiving and I intend to keep on doing it”

Roosevelt’s story is the perfect example of how FSL’s ABHTH program and our Licensed ABHTH Providers are so important to the community. They give people like Roosevelt, not just the means to take care of themselves and provide them with a safe place. They open their homes and hearts to them and allow them to feel a part of their family. If Marie can teach us anything, it’s that caregiving leaves a positive impact on both the client and the caregiver forever.

Established in 1974, FSL is dedicated to providing integrated, customized care for those who need it in the Phoenix area. We offer a wide range of home- and community-based services, including:

These services are designed to enable Arizonans of all ages to live happier, healthier, more independent lives. So, if you or someone you know is struggling to have their needs met, don’t hesitate to contact us and find out how we can help you. And if you’re looking to give back, consider donating or volunteering your time to our mission. We can’t wait to work with you!