Dad fell yesterday. And why did he fall? How hard did he fall? What was he doing to cause the fall? Well…only he and Ruby know those answers. While my mother found it appalling that I’d even have a dialogue with them about it, my father rattled off some flippant account that minimized the fall altogether. I’m pretty certain the goose egg on his forehead didn’t mosey there from a slight bump caused by a slight trip on a rug that was slightly in the way. Which, by the way, was the only constant in both their responses. A rug. As the story goes, a wheel on dad’s walker had gotten caught, causing him to trip. I’ll translate that for you…DAD DID NOT HAVE HIS WALKER! You may wonder how I can be so sure. The fact of the matter is, my dad is in serious denial about his physical limitations. His walker is usually in one room while he’s in another. The rugs are just an added issue. My mother has an army of them that seemingly adorn every inch of flooring in the house. Rugs that were recommended be removed, mind you.

Ahhh, yes. Let’s back up. The last time we spoke, I’d contacted FSL in an attempt to get some help for my parents. It is probably one of the best choices I have made thus far. For a nominal fee, I was able to have a licensed clinical social worker come out to their home. Now, again note, Ruby & Robert are notoriously inflexible. Ruby’s mantra is, “Mind your business and I’ll mind mine.”

When the social worker came out, Jennifer was her name, she was simply delightful. Not only was she empathetic towards me and my concerns, she most importantly made my parents feel empowered. A must with those two. With all that was addressed, she didn’t make any of us feel inadequate.

During the comprehensive assessment, Jennifer gave us numerous resources and also created a plan of care. My parents were surprisingly acquiescent. Towards the end we received what she called a twelve- point safety check, which was also amazing. Grab bars, a raised toilet seat, some type of emergency response equipment…all things I have suggested, were all brought to the table. Yet, somehow coming from someone else, it resonated with them. HOORAY!!! But lo and behold, the barrage of rugs topped the list and that did not resonate with my mother one bit. Nope. Ruby’s decadent decor was not to be touched. Love her spunk but, sheesh!

Both Jennifer and I felt that some in home care assistance would be beneficial but my parents vehemently declined. Jennifer did not push. She instead left the door open to re-visit the option once they were ready.

In the end, I received both an electronic and paper form of the plan of care and the in home assessment. This made it easy to share everything with my siblings at the family meeting I called. Kitty, as usual, sided with my parents. “Mom and dad will know when they need help. They’re not children, you know.” I chose not to respond to that. Ben participated via Skype due to his hectic travel schedule. He was his normal aloof self. It was left up to my husband and me to implement the things the social worker recommended. But as you can see, we were not able to get the rugs out. Four weeks and a fall later, I think we may be making some progress. Today my daughter and I were able to confiscate six of the eight rugs. Small victories, right?

We gifted our Chandler home to my daughter and her fiancé as a wedding present. That was very rewarding to do but I’ll tell you, this new stage of life is ever challenging. I thought that making the move to Sun City to be near my parents would offer relief, but if I’m being honest, I’ve increased my worries by at least fifty percent. There’s no rest for the weary.

Until next time.
XOXO,
Sleepless In Sun City 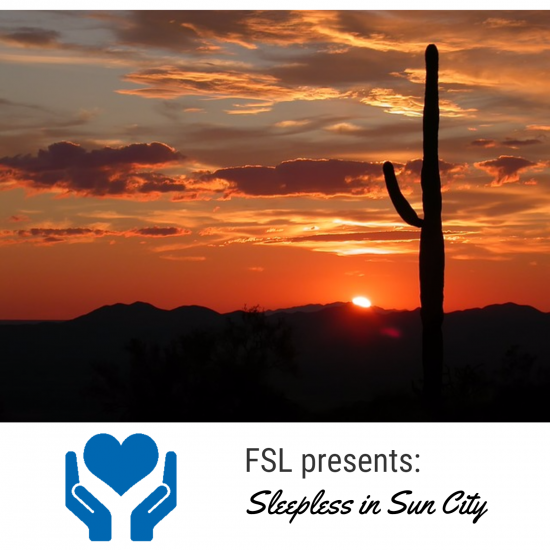